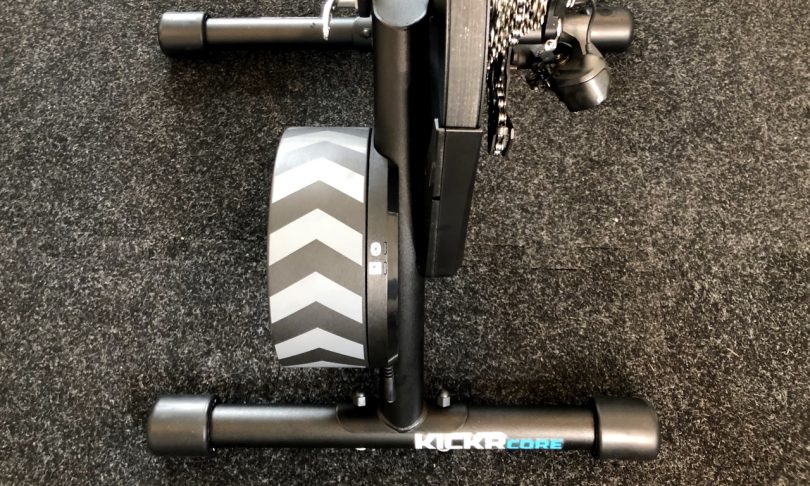 Wahoo announced the KICKR CORE at Eurobike last July. The Core was Wahoo’s attempt to enter the midrange direct drive trainer market and go head to head against the Tacx Flux and Elite Direto. Two months later, the KICKR CORE is now in stock and you can order yours today.

Other than the $300 cheaper price, The CORE uses a lot of the same technology and hardware in the Wahoo KICKR Direct drive trainer but with a smaller flywheel, less max power, and less max grade. The KICKR Core flywheel is 12 lbs. For comparison, the KICKR 2017 and previous generations had a 12.5 lbs flywheel. Wahoo SNAP has a 10.5 lbs flywheel. So ultimately you are getting the same flywheel as a 2017 KICKR has which is pretty darn good.

Wahoo used the same belt technology in the CORE as they now have in the KICKR 2018 making it just as quiet as you can see in the video demo below:

Tacx started the midrange direct drive trainer segment with their Tacx Flux as a more affordable way to upgrade to a smart trainer. Less than a year later, Elite introduced the Elite Direto which was a big hit among athletes and received rave reviews for its power accuracy, quiet noise, and many other features.

It was only a matter of time until Wahoo entered this segment with the new KICKR Core, and without skimping much on many of the features that made the KICKR the top selling smart trainer on the market today. The CORE is so similar to the KICKR it makes me wonder what’s going to happen to the sales of the Wahoo KICKR. Would the CORE steal the top spot from its big brother?