The H3 from Saris features that same solid Hammer design it’s known for and made from cast and machined aluminum. It’s built to handle up to 2000 watts and replicate 20% gradient. This is more than enough to get your legs burning and can handle the steepest inclines in Zwift. Encased inside all of this is a big and a heavy 20 lbs flywheel.

The steepest section in Zwift is 17% and you can experience it heading up to the tower. The more you know!

The H3 comes in very simple packaging. You will find the trainer, power cord, bag with end caps, and manuals. A quick-release skewer is not included by the way. Make sure to use a trainer specific quick release skewer if you need one.

You need to provide your own cassette and install it. The H3 is compatible with 8-11 speed Shimano and SRAM.

You can purchase an 11-speed Shimano 105 cassette for about $45 but if you are still on a 10-speed cassette then you can save a few dollars and get a 10-speed Shimano 105 cassette for about $50. If you need a cassette plier, the Feedback Sports cassette plier and Cassette Wrench are one of my favorite and easy to use. But you can find cheaper chain whip, a lock ring tool and any adjustable wrench.

Once assembled, pair the H1 to the Saris utility app available for iOS and Android devices to check to see if there is a new firmware available. The firmware can be updated wirelessly using the Saris app. You can also update the firmware using the Rouvy app. Calibration can be done directly from Rouvy, Zwift, and other apps as well.

While you are in the app, run the calibration to set the brake strength and accurate power measurement. For best results, ride the trainer for about 10-minutes and perform the calibration. Calibration on direct drive trainers should be done once every couple of weeks, if you switch bikes, or if you move the trainer around.

The Saris H3 follows all the new wireless communication standards. It’s dual ANT+ FE-C, Smart Bluetooth, and FTMS compatible. I tested it mainly in Zwift and TrainerRoad and it worked well in both. However, it should work with The Sufferfest, Rouvy and any other app that support these wireless communication protocols.

The H3 broadcasts power, speed, and cadence. So, it is simple to use with Apple TV which only allows two simultaneous Bluetooth connections.

If you want to hear how loud or quiet the H3 is, you can watch the video above. But if you prefer to just skip to the noise demo section, just click here.

The trainer is very quiet. Just as quiet as the KICKR 2018 or Tacx Neo per my ears. However, per my measurement, it measured a little higher than the KICKR and NEO as you see below. But, I think Saris did a good job quieting it down a bit.

The interesting part is, claims on their website that the H3 measured 59 decibels at 20 mph. I measure trainers sounds in a quiet and almost sound proof area and run the same setup with every trainer for data collection sake. My measurement came in at exactly 58.92 dBA at 20mph.

The H1 is equipped with a heavy 20 pounds flywheel. The ride feel felt really good. The flywheel will coast for what it feels like forever. ERG mode and Sim mode felt really good with the H3. it was amazingly responsive in ERG mode as you will see in the power distribution data below.

Saris claims the H3 is accurate within +/-2%. The goal is to see if the H3 comes within that claim.

The first ride was just a regular ride on Zwift in sim mode. I used my Assioma Duo pedals along with my Power2Max powermeter. The data looked really good and overall the H3 came in within the claimed accuracy if not even better.

Looking deeper into the power data, I found some sections where the H3 was measuring a bit higher. I am usually not concerned about spikes here and there. That’s typical with powermeters. But these highlighted sections were an indication of a bigger issue. Let’s dive in.

Switching over to ERG mode and this is where I started to notice some issues. I ran the same 3×10 minute test that I usually run to see how trainers perform at different flywheel speed. Nothing tricky about this workout. Just a simple workout and is only meant to give me a decent workout while testing trainers in three different gearing combination or different flywheel speeds.

Looking at the chart above, you can immediately tell something went way off during that third interval.

The first 10-minuets was done in a small gear. Flywheel speed averaged 12.2 mph. The H3 was almost perfect with the Assioma and Power2Max.

The second 10-minutes was done in big chainring (53/17). speed reported by the trainer was 20.5 mph. It looked good there as well and no problem. A little variation in the power line but that’s expected when using a bigger gear.

Going into the third 10-minutes interval using a 53/13 gearing combination. The trainer average reported speed for the 10-minutes was 26.3 mph and this is where things went wrong. The H3 was off by up to 12.39%.

After that workout, I decided to see how the trainer does during high-speed descents so I went climbing on Zwift. Coming down the climb, I tried to keep the power up and kept the pressure down on the pedals and immediately noticed the same trend. The H3 was over-reporting power. Here is the chart for the two-minute section during my descend.

During that 2-minute descend highlighted in the chart above, the H3 averaged around 196 watts while the Assioma was around 170 watts.

This morning before hitting publish on my video, I decided to give it another test for fun sake. Well, mainly to make sure I wasn’t doing anything wrong. Much easier to test trainers when everything works as it should. I picked up a workout from TrainerRoad. The workout is called Carson. Good workout. Give it a try!

I made sure everything was calibrated and started in a small gear and switched into bigger gears as I went into each interval. I wanted to see at what point the H3 starts to over-report power.

First two intervals looked really good and everything was perfect. However, as you see below, the third, fourth and fifth intervals, the H3 was over-reporting. After the third interval, I started to slowly go up in gear (easier gear) to see at what point the trainer get back to reporting in line with my power meter and that didn’t happen until the last interval.

And here is the speed reported by the H3.

So based on that, anything above 21 mph, the H3 starts to over report power. The faster that flywheel spin, the more free power you get.

Other than the power accuracy issues, the H3 responded very well to the terrains in Zwift and it was outstanding in ERG mode. I like to look at power distribution to get a good picture of how a trainer responds in ERG mode. For example, if the power target was 235 watts I look to see how much time I spent +/-10 watts of my target zone.

The H3 broadcasts cadence as well over Bluetooth FTMS and ANT+ FE-C. It tries to estimate it using a combination of power and flywheel speed. Other than the Tacx Neo 2 and TechnoGym MyCycling (anybody own this trainer? Serious question), all other trainers use a similar method. Some do it better than other. Having a massive flyhwheel can be a disadvantage though and you can clearly see it in the below chart:

The chart above makes it look bad but in all honestly, I didn’t really notice it that much during my ride. You will see these dropouts right after surges in power like right after sprinting or any high cadence action. But in steady-state efforts, cadence measurement was fine as you see below.

Overall, I am not that picky when it comes to cadence and I am generally ok as long as the trainer gives me a number to look at. But if you care about accurate cadence or do a lot of cadence drills, then investing in a cadence sensor might be something to consider.

I was critical of CycleOps/Saris last year when they introduced the H2. It was nothing but a lame update. They changed the color and called it H2 and that was basically it. However, when I saw the H3, I thought we might have a winner, especially at the retailed price of $1,000.

I love the design of the H3. It’s a well-built machine and looks solid. However, Saris really need to address these accuracy issues. Probably the majority of cyclists won’t notice it, but if you are a track cyclist, time trialist, triathlete, or a pro athlete who prefer to use a bigger gear when in ERG mode, use resistance mode, or like to put down some watts during high-speed descents, then inaccurate power become more pronounced.

If you are interested in the H3, you can find it on Amazon or CleverTraining for $1,000. The price tracker below will keep an eye on the H3 price on Amazon as well and you can signup to get a price alert if wish. 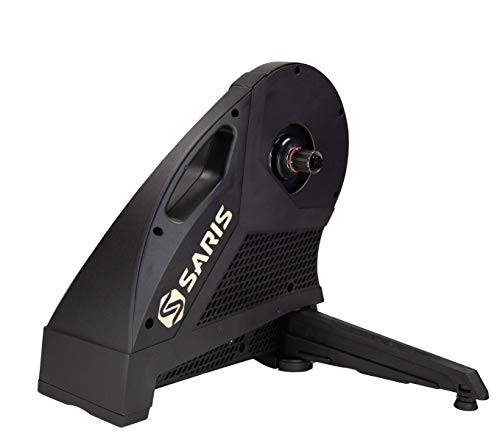