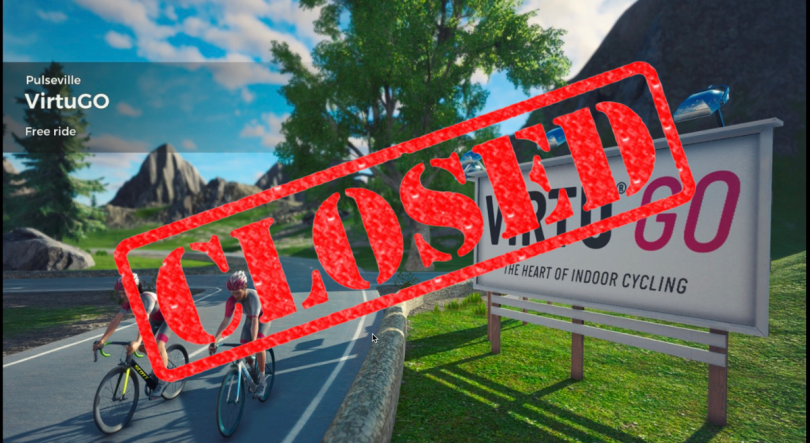 “This decision was not made lightly, however after investing much time and resources during the last three years, we were unable to gain the traction we had originally anticipated.”

For customers with a current subscription, VirtuGo will cancel your membership and you should continue to have access until November 25th. You can also export your rides in .fit file format then import them into a different application like Strava or TrainingPeaks for example. This can be done by selecting “My profile -> Ride history” within VirtuGO and then manually clicking the export button on the top right hand corner for each of the workouts you wish to export.

VirtuGo went public with its platform earlier this year and started charging €5.95/month or less than half the price of a monthly Zwift membership.

Their platform looked a lot like Zwift with virtual worlds and the ability to customize your avatar. But VirtuGo wanted to position itself as a training platform as well and offered a library with different training plans.

VirtuGo is the second cycling training platform to shut down this year. Just last September, MaximumTrainer decided to shut down because of lack of interest even though it was completely free to use “Unfortunately, we had no external developer help and can not even pay for the hosting of this site.” – according to Max, their main developer.

RGT is another virtual cycling platform that is out there and also free to use. However, they don’t seem to be gaining any market share or traction at least not that I am aware of. is another cycling app that is still in the work and currently in beta but requires me to steal my boys gaming PC to have a chance to run it.

The indoor cycling market is slowly growing but also going through a period of consolidation like we saw this year with The Sufferfest and Wahoo.

As of today, Zwift, TrainerRoad, and The Sufferfest are the three top apps dominating the indoor cycling market. You can add Rouvy and Xert to that mix as well. All of these apps started with a unique idea and had a chance and time to slowly build their platform and build a customer base. They are available to run on most devices. I can pull out my iPad and run The Sufferfest. Or use a three or four generations old phone or tablet to run TrainerRoad. I’ve taken my iPhone to the gym, placed it on a treadmill and opened Zwift, paired my footpod and heart rate monitor and started running.

All the top apps are unique in some way and just work. TrainerRoad and The Sufferfest have been around for many years before Zwift came into the scene. They had a chance and time to develop their platform and build a good customer base.

Zwift came after them with a strong focus on user experience. They gamified the indoor cycling experience, made it social, and made it available on multiple platforms and easy to use with constant updates. Basically, they ticked off most of the characteristics of software and they got the funding to market and heavily advertise.

I thought VirtuGo had an interesting idea but their implementation wasn’t strong to compete in today’s market. For a starter, the app was only available on Mac and PC and required a decent PC to run it. They were slow releasing updates and took them close to a year to bring Bluetooth support into their app. Their training plans were not any better than what Zwift currently offers and lacked behind TrainerRoad even though they had Mick Rodgers, a retired professional road cyclist as the CEO and Bjarne Riis as an investor and their slogan was “Indoor Cycling Platform With Professional DNA”

Basically, what I am trying to say here is, most athletes want applications that just simply work and benefit our training/fitness. Our goal to workout and get fitter. If your app is difficult to use, have to hunt down the installation file or requires me to purchase a $2000 gamin PC to run it, then I might not be interested and apparently free doesn’t even cut it.

If you used VirtuGo, let me know your thoughts and what they could’ve done better or differently to survive.