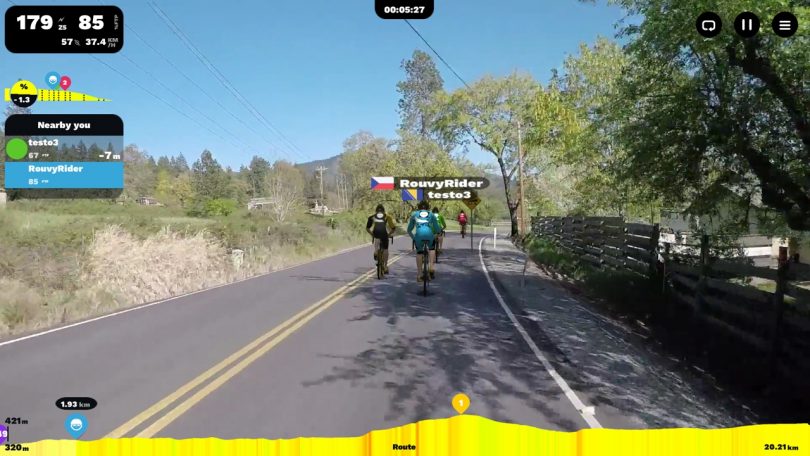 Today at Eurobike, Rouvy unveiled a new augmented reality cycling app that allows users to create and share GPS-synced video routes. It’s a mix of real video rides along with 3D objects. Like Zwift but on real roads and your avatar. It’s currently in beta and you can signup here.

Here is their press release:

Rouvy presents a potential game-changer for indoor cycling based on its advanced, mixed-reality technology.

Rouvy’s unique indoor cycling platform is designed based on user-generated training content. Users can easily create and share a GPS-synced video route within only hours. The app enables riders to bike the planet indoors over its available 2,000 geo-located video routes.

“We have a vision of bringing indoor cycling to any road on the planet by mixing real-life video routes with augmented reality,” says Petr Samek, one of Rouvy’s founders and CEO. “Our app allows cyclists and triathletes from all over the world to virtually come together on a real road by generating and processing animated 3D riders in real 2D videos. From now on, you will be able to see different, realistic-looking objects and riders on Tour de France roads, well known Alpine passes or any route which is based on GPS and real video data.”

Samek continues, “Rouvy ensures a precise simulation of outdoor cycling brought indoors by using advanced algorithms to sync both video and elevation profiles. To significantly improve elevation profiles, based on camera angle tracking, took 2 years of development and many years of university research. Additionally, tons of available second-by-second individual user data are to be utilized for instant augmented simulation and replay. Any chosen records can be your interactive virtual competitors in the time trial or group training modes.”

The new concept provides users with enhanced levels of diversity, interactivity, fun and competition. Cycling enthusiasts of all levels are sure to enjoy the realistic experience of riding outdoors from the comfort of their homes – anytime and ANYWHERE.

Rouvy’s new augmented reality will be in private beta for 2 months. Registration for early access is now open on https://rouvy.com

Rouvy is one of the TOP 5 most used software applications by the global cycling community for indoors. The most featured training platform enables cyclists to create custom routes, bike the planet indoors, compete in online races and manage training data with no lock-in. Rouvy equally ensures serious training by available interactive workouts, advanced pedaling analytics and year-round motivational challenges.