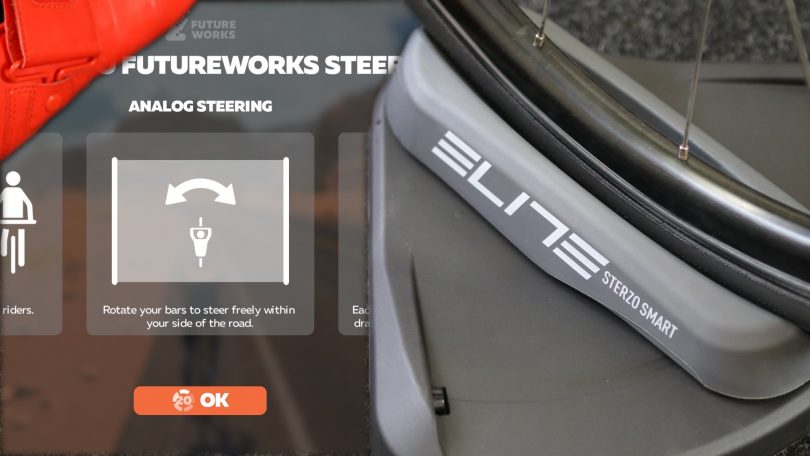 Zwift released a big update last Friday with numerous features and bug fixes. The update is now available on all devices including Apple TV, iOS, and Android. If you don’t see the update on your device, you might need to force the update by going to the App Store and run the update manually on your device.

Zwift released steering last year as part of its FutureWorks beta program. One year later, in partnership with Elite, steering has expanded to all roads in Zwift.

Steering is currently only compatible with the Elite Sterzo Smart steering plate which you can purchase for $110 here. Further hardware compatibility is planned such as stationary bikes.

With steering enabled, you take full control of your avatar positioning. Want to move through the bunch? You’ll need to stay alert and find that gap – your avatar will no longer ‘ride through’ other avatars on the road. Like riding outdoors, FutureWorks Steering lets you decide if you want to sit on a rider’s wheel or maneuver around them to pass.

Elite Sterzo is basically a riser block that you place right under the front wheel and allows you to rotate your handlebar up to 34 degrees.

It’s ANT Plus and Bluetooth compatible and requires 3 AAA batteries that are included to power this device and should last you up to 600 hours per Elite.

It has an Automatic return system for you to easily get the handlebar back to its original position.

And Anti-slip rubber feet on its base for more stability and prevent it from slipping and moving around.

I had it on my hard rubber fuzzy type carpet that I have in my training space. And it wasn’t slipping around or anything. It actually worked pretty well.

You should see a new steering icon in the pairing screen. This allows you to pair the Sterzo device. Even though the Sterzo device is ANT+ and Bluetooth compatible, Zwift currently only supports pairing in Bluetooth.

You will be able to steer your avatar from right to the left. However, you won’t be able to steer off the road or cross the center line. Also, you can not collide with other riders which is too bad. I could’ve had a little fun with that.

It was easy to get used to steering immediately. The precision was just right to steer where you want, just a slight turn will slowly move your avatar to either direction. So it wasn’t too sensitive or slow to respond. I think they got it just right.

With Steering out of the way, let’s talk about other features and updates that you will find in this release: