In the smart indoor bike trainers, Wahoo was one of the first one to introduce a smart direct drive trainer and was one of the most anticipated products in the cycling fitness industry. Three years laters, Wahoo announced an updated version of their hugely popular Wahoo KICKR, simply called The New KICKR.

From a first glance, The New Wahoo KICKR smart indoor trainer looks exactly the same as the old one. In fact, the only way you will probably be able to tell the difference between the two is by looking at the handle right on top of the fly wheel. 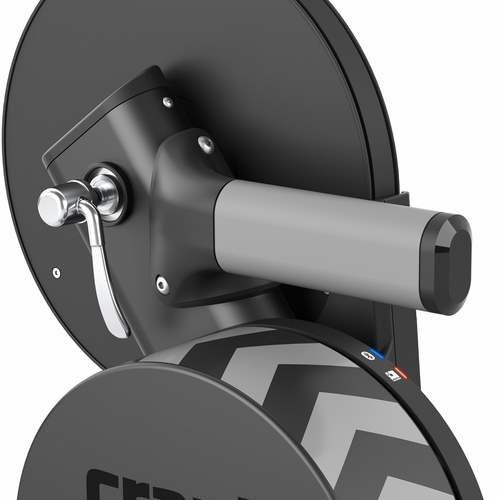 According to Wahoo, The New Wahoo KICKR got a new algorithms to improve responsiveness and better replicate the sensation of riding on the road. Ride feel when you are indoor is extremely important in my opinion and that’s usually what differentiate  a good trainer from a not so good trainer. Wahoo’s old KICKR was good in that regard. I will be testing their claim as soon as I have my hands on one and report back in a more in depth review of the New KICKR.

Wahoo KICKR  and the New KICKR are ANT+ and Bluetooth compatible. The New KICKR was updated with couple of status LEDs to indicate connections. You will see these LEDs on the side next to the fly wheel right below the side handle. Additionally, ANT FE-C+ compatibility was added, increasing the number of third party devices it will interface with.

The new KICKR bike trainer features a redesigned gearing and belt system that decreases noise caused by friction and vibration. According to Wahoo’s claim, the noise you will experience is just around 61 decibels.

The old KICKR definitely had its issues with the power accuracy. Many reported about 10% difference in power when compare to a power meter. With the New KICKR, Wahoo is claiming  (+/- 2%)  power accuracy. That’s impressive if it’s actually true.

The New KICKR is priced at $1,199.99 and available to order today. It will come with an 11-speed cassette and Wahoo’s RPM cadence sensor. You can easily swap the cassette with a 10-speed if that’s your need.

Here is a little video of the New Wahoo KICKR smart indoor trainer.