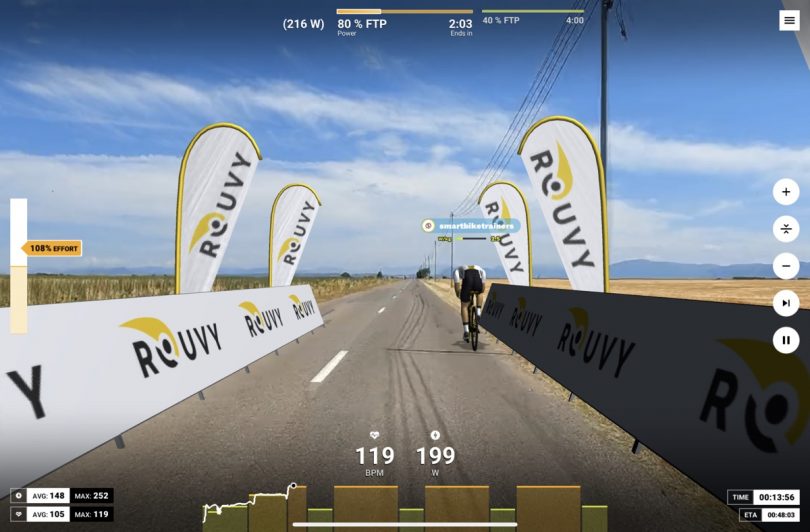 To use the new Rouvy AR app, all you need to do is update the Rouvy AR app on your mobile phone, tablet, or PC (Windows or Mac), but not the Apple TV version – at least not yet.

When you open the new Rouvy AR app, you will see the new workout option on the main page.

The workout option is only available for cycling at this point. Rouvy seems to be not putting much work on the running side of things as they have ZERO new routes added since I last looked at it which was about a year ago.

When you click on Workout, you will see a list of workouts which you can select from. Rouvy has their own workouts and if you have a TrainingPeaks accounts linked, then you should see these workouts show up under TrainingPeaks.

When you click on a workout, you will see the workout details. From there, you can either start the workout and go with the route selected for you, or change the route if you would like to something else.

In my case, I opted to create my own workout in TrainingPeaks and import the workout inot Rouvy. Once you start a workout, your Rouvy avatar will be dropped to the start area and off you go. If you have a smart trainer paired, Rouvy will control the trainer in ERG mode – which seems to be the only mode avaiable – and you just need to pedal until the workout is finished.

Rouvy gives you options to increase and decrease your workout difficulty, pause, and skip intervals. If you decide to increase the workout difficuly, be ready to see a 4 to 12% jump at one time rather than increaments of 1%. In warmup and recovery blocks, it will increase/decrease by 4%. During the main interval blocks, it will increase by 8%. I have seen even 12% jumps so it seems to be based on your FTP zones. Assuming you are at 120% of FTP. If you press the plus sign to increase it, it will jump to 132% which is significant if you are just slowly trying to increase the difficuly of each interval. I am not sure if this is customizable somewhere but I couldn’t find an option anywhere to change that. Eitherway, a 1% increase/decrease is the better option or allow user to customize it.

Overall, it’s nice to see Rouvy combine both apps into one and taking advantage of its AR feature. This is great if you want to pre-ride a known route using a power file or test out a BestBikeSplit pre-planned power file.

Did you give the new updated Rouvy AR app a try? Let me know what you think.