Peloton Goes After Its Competition With a Lawsuit Against Flywheel

Peloton filed a lawsuit against Flywheel, claiming the company infringed on Peloton’s patent with their “FLY Anywhere” screen according to CNBC.

According to the suit that was filed today, Peloton is “claiming Flywheel infringed upon Peloton’s patents, “by creating a copycat of the Peloton Bike experience called the “FLY Anywhere” that, among other things, detects, synchronizes and compares the ride metrics of remote users on a graphical user interface,“. The suit was filed in United States District Court for the Eastern District of Texas Marshall Division.

Since its launch, Peloton has grown its subscription member base to 600,000 and $300 million in revenue. Its business is targeted toward the at-home cycling enthusiast and selling stationary bikes.  Users can stream live or on-demand classes from home. The screen on the bike shows the rider’s output in (watts), speed, cadence, resistance, and other riders doing the same class. Riders and instructors can interact with other riders from around the world, see how they are doing, send them messages, and chat all using the Peloton’s 22-inch HD touchscreen. 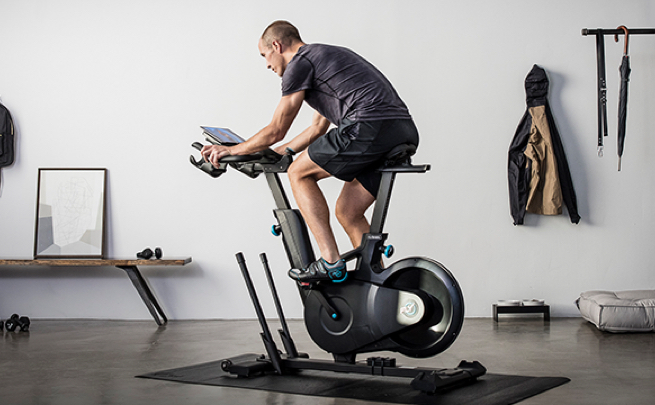 Flywheel is largly a studio-based model. They launched their FLY Anywhere home platform back in November of last year and now they are stepping into Peloton’s turf.

At an interview last December, CEO John Foley said he wasn’t concerned about competition in the stationary cycling space. However, there seems to be a lot more than pure competition and there seems to be more drama into this. According to the report, the lawsuit claims that Flywheel received proprietary information from Peloton via Michael Milken.

During an invitation-only J.P. Morgan investor conference, Foley allegedly spoke to Milken about potentially investing in Peloton. In the conversation, the suit alleges, “Milken held himself out to Foley as an interested, potential investor in Peloton and pushed for information on topics including Peloton’s future business plans and strategy, and how or whether Peloton could protect its intellectual property and exclude others from the at-home cycling business.”

If Peloton is starting to feel some pressure from the competition, it will be interesting to see if they go after other indoor cycling companies. Zwift recently invested in VirtuPros, and indoor cycling company that makes smart bikes. Now probably you and me can all argue that these bikes aren’t even similar. The VirtuPros is a smart bike that can simulate terrains, ERG Mode and has an open platform. It’s geared toward cyclists and triathletes not the spin class fans.

Companies will fight for their patents. That’s how they ensure consistent growth and keep a tight grip on the market.

I am not a lawyer or even close to understanding how patent law works but I think you can argue that some of the functionalities you see on Zwift are somewhat similar to what’s on the Peloton platform.

Peloton currently is showing no sign of slowing down.