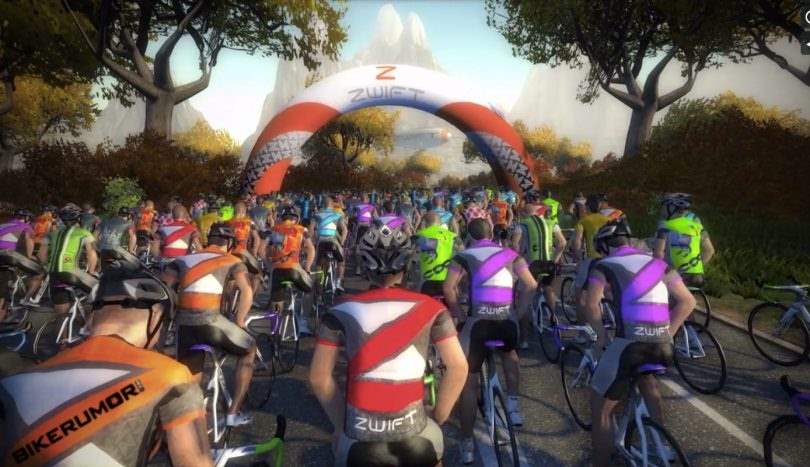 Racing on Zwift has undoubtedly changed the world of training. From races lasting just 5km to over 100km, the variety of racing in Zwift is increasing. With over 200,000 members registered, and anywhere from 1,000-2,300 (as of December 2016) riders online at any given moment, the popularity of Zwift is evident. With most seeking IRL race wins or PBs, racing in Zwift has grown rapidly and the level of competition has risen to the dizzy heights of near pro-level.

With so many racers eager to knock themselves out on course, racing in Zwift may be something to be feared. The pain is relentless as riders storm up climbs, attempt to breakaway, and deliver super sprints.

My coach tells me that training should be specific to the event I am training for and sufficiently hard, inducing changes in my muscles. So what better training than real races?

Surely being pushed to V02 Max and beyond in a race situation will drive more specific change in my body than following a zone-based training ride?

CAN ZWIFT RACING PROVIDE A NEW ROUTE TO SUCCESS?

Although you may be riding in a virtual world, the pain is very much real!

Racing on Zwift occurs every day, and often multiple times throughout each day, catering for riders in different parts of the world. For example, 14 races were carried out on the 22nd December 2016. The choice is incredible. Each race often categorizes riders based on their FTP. The categories work like this:

Each race often requires a specific name tag that you will need to put into your name before the race. For example, when racing a WBR-led race, ‘WBR (X)’ is required, with ‘X’ being your category.

HOW DOES A ZWIFT RACE USUALLY UNFOLD?

There is one common factor in Zwift racing: it’s very intense.

When racing in Zwift, I will often spend the first minute or so of the race well into Anaerobic (Zone 6) and Neuromuscular (Zone 7) power zones. Then spend the rest of the race riding close to threshold, before firing up the afterburners and giving it all in a breakaway or sprint. Collapsing onto the handlebars with the sole focus of breathing is not uncommon.

Below: The first 90 seconds of a Zwift race. Be prepared to nail it as soon as the race begins. Not being in the leading group of a race at the very beginning may prove fatal to your chances of a win!

HOW IS ZWIFT RACING SIMILAR TO REAL-LIFE RACING?

Zwift races often last 30-90 minutes, much like most criterium, circuit and the shorter road races. However, the power output in Zwift racing varies less than that of a real-life race, largely due to the fact you do not have to freewheel around corners and that drafting in the real world feels somewhat easier to maintain. Below is a screenshot from a Zwift-race analysis:

This analysis of my effort in the EVR (A) Race, is over a 40-minute period. The power output does vary (as you can see by the purple spikes) due to the virtual gradient, and my response to attacks and sprinting.

Real-life racing (data below) illustrates the repetitive bursts of power, as you constantly accelerate out of corners; something not reflected in Zwift racing. My real-life race data analysis below is from the 2016 UK School Games Road Race. Racing the best 52 riders from across the country, we completed 30 laps of a racing circuit, lasting just over 90 minutes. 3 riders successfully broke-away from the peloton, that crossed the line in a sprint finish. I managed to finish 10th in the bunch sprint, giving me a finishing position of 13th out of 52. I was pleased with this performance, considering the fact I was passing riders in the sprint finish all the way to the line!

The image below, is a screenshot from the 2016 UK School Games Road Race:

As you can clearly see, my power output varies significantly more than in a Zwift race (due to repetitive acceleration out of corners and freewheeling downhill). My heart rate, speed and cadence reflects this. A similarity between the analysis of the Zwift race and the real-life race is that my heart rate in both, are quite similar; my heart rate trace IRL (in real life) being just 3 beats lower. The power output in the Zwift race is noticeably higher than that in the real-life race, but there are reasons behind this:

Concluding from the two bits of data analysis, Zwift racing is not as ‘explosive’ as a real-life race. However, the average power output is greater, and could be compared to a time trial effort. Here’s a screenshot from a real-life time trial effort analysis – I did this on a road bike with aero bars on a few days before Christmas 2016.

I averaged 27.0mph (43.45km/h) for 7 miles on a flat course. My average power output, heart rate and cadence is smoother in this analysis than the others, but then again, I was purposely maintaining a power output. The little dip in power, heart rate and cadence is due to a sharp chicane that needs to be taken carefully! The Zwift race effort is not too different from this time trial effort. A time trial effort in Zwift is unsurprisingly more similar to a real-life time trial effort. This screenshot below illustrates how time trialists could use Zwift to good effect:

I rode with a few other teammates as ‘Team UK’ in the Tacx Team Time Trial World Championships, held on Zwift a few months before my real-life TT effort above. Averaging 202bpm for 55 minutes, the effort was incredibly hard. The power output in this TT effort is similar to that of the real-life TT effort, in addition to cadence and heart rate. Moreover, the average power output of this Zwift-TT effort is just 3 watts greater than that of the Zwift race – Zwift races are pretty similar to time trials!

So, how similar is Zwift racing to real-life racing? Well, in terms of a criterium, circuit or a short road race, not that similar. However, in terms of a real-life time trial, there are some similarities (such as average power output).

POPULAR WORKOUTS – ARE THEY BETTER THAN A ZWIFT RACE?

Workouts have dominated health magazines, websites, and general fitness understanding. Some popular workouts include the ‘Pyramid’ format, where an individual completes multiple efforts, increasing in time, or power, or heart rate, or cadence, up to half the number of efforts, before reducing whatever he/she has decided to work on. Also known as ‘Russian Steps’, a Pyramid workout will certainly be intense and is effective for usually shorter efforts.

I have tried Pyramid workouts multiple times, and although I find them to be very hard, I don’t feel that I have stressed my muscles to the same degree as a Zwift race would. I reckon the competitiveness in Zwift racing really does drive on the effort, and progress.

Zwift features a ‘Workout Menu’, where you can pick from a range of workouts, varying in purpose. You can access this feature by pressing the keyboard letter ‘E’ in-game.

Another popular way to train is via Sufferfest videos. IWBMATTKYT is an acronym I have learned off-by-heart (I Will Beat My Ass Today To Kick Yours Tomorrow). Prior to my Zwift-addiction, I used The Sufferfest videos as a way to kill turbo boredom, and of course, progress physically. These workouts are fun!

However, as these are simply videos in all respect, and do not use your power or heart rate figures, they use RPE (Rated Perceived Exertion).

The RPE scale is used to measure the intensity of your exercise. The RPE scale runs from 1 – 10, with 1 being very very light exercise i.e. eating pizza, to 10 being a full-on sprint effort. Although you may be able to judge ‘an effort 8’ well, in a real race, you do what’s necessary. The competitive edge Zwift racing has to offer, in my opinion, sets it apart from workouts and workout videos.

I'm a 17 year old cyclist from the UK, and have aspirations to become a professional. I have 3 National titles and 7 Regional titles so far to my name, and plan on extending this far into the future. I currently ride for Team WBR (World Bicycle Relief), a charity team, and previously rode for Team dZi (also a charity team).

I compete primarily in road racing, time trials and track racing. A large amount of my time training is done on Zwift, a virtual-world that simulates riding in-real-life. I often compete in races on Zwift, and have won a few :)

I document my racing, training, results and other aspects of cycling through my blog: www.chrisdurham.me

I'm a 17 year old cyclist from the UK, and have aspirations to become a professional. I have 3 National titles and 7 Regional titles so far to my name, and plan on extending this far into the future. I currently ride for Team WBR (World Bicycle Relief), a charity team, and previously rode for Team dZi (also a charity team).

I compete primarily in road racing, time trials and track racing. A large amount of my time training is done on Zwift, a virtual-world that simulates riding in-real-life. I often compete in races on Zwift, and have won a few :)

I document my racing, training, results and other aspects of cycling through my blog: www.chrisdurham.me