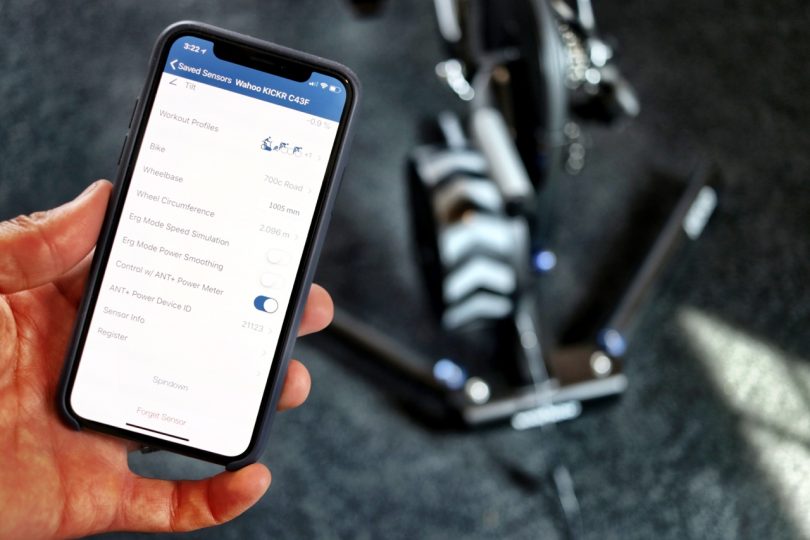 If you have an ANT+ power meter and a Wahoo KICKR or Wahoo SNAP, you might not be aware of a neat little feature the KICKR/SNAP has. Surprisingly, most people I talked to aren’t aware of it, or know it’s there but don’t have it enabled.

The feature is called PowerMatch and you can find it within the Wahoo Fitness app as “Control w/ANT+ Power Meter”.

PowerMatch allows you to use your power meter as the data source when training instead of your bike trainer’s internal power meter. Many cycling applications support this already such as TrainerRoad and Zwift and when enabled, your power meter will control resistance on your smart trainer.

In Zwift, if you select a power meter as your Power Source and a smart trainer as your “Controllable” trainer as you see in the paired devices screen below, power match is enabled by default.

This allows riders to record and display power from their power meter while taking advantage of the resistance control in their smart trainers.

When enabled, the Wahoo KICKR/SNAP pairs to your ANT+ power meter and allows it to control the KICKR resistance. In many cases, this simplifies the pairing process. You only need to pair the KICKR rather than pairing two separate devices. Also, this comes in handy in cases where you only use Bluetooth to connect and your power meter only supports ANT+.

Other areas I found it to be useful is when using Apple TV to run Zwift. Apple TV can only pair to two Bluetooth devices and when this is enabled, you can just pair the KICKR as the power source and controllable trainer, freeing up another Bluetooth port for your heart rate monitor or cadence sensor.

Also, when enabled, you don’t have to perform spin downs to calibrate your Wahoo KICKR/SNAP.

Of course, just like anything, there is the risk of things not working as they should. I’ve had my power meter fail on numerous occasions. Using this feature will only work as good as the connection between your KICKR and powermeter. But in my years of using it, I’ve never really had any issues that I can remember.

HOW TO ENABLE IT

That’s it. You should see a power meter icon next to your trainer and next time you workout, the KICKR will pair to your power meter and use it instead of its own power meter.

Also, here is a quick video on how to do that: