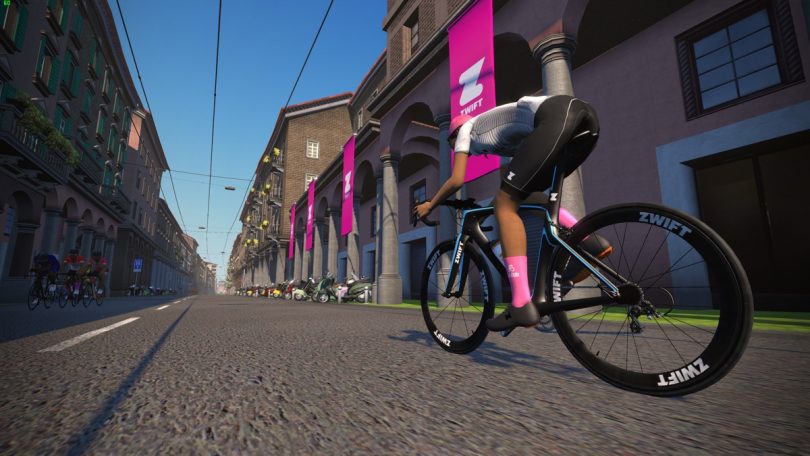 Zwift is planning on releasing the 8.2km prologue course this Saturday, May 11th, the same day professionals take to the start line kicking off the annual Giro d’Italia professional cycling race. The course will allow Zwifters around the world to feel closer to the race than ever before.

Starting in the historic town of Bologna, the prologue features a 6km run in but finishes atop a biting 2.1km climb with an average gradient of 9.7% and a maximum gradient that tops out at 16%.

The Giro d’Italia has a long history of innovation,” says Paolo Bellino, CEO of RCS Sport, Organisers of the Giro d’Italia. “It’s always an exciting race and we’ve never been afraid to experiment with new ways to deliver excitement. This year, we are excited to be able to bring a new technological advancement to the race. Not only does this give fans around the world a chance to get closer to the race by experiencing a stage, but it also gives the competing riders a new way to prepare for the start of the race.

A CHANCE TO WIN

The course will be launched publicly on Saturday 11th May in conjunction with a celebratory series of time trial races, held on Zwift for the duration of the Giro d’Italia. Zwifters who take part in an event on the Bologna course within the first three days of launch will be entered into a prize draw for the opportunity to win a Maglia Rosa, signed by the winner of the 2019 Giro d’Italia.

This is a fantastic opportunity for us to help encourage global participation around the Giro d’Italia,’ says Eric Min, Zwift CEO and Co-Founder. “By engaging a large global community of cyclists, Zwift has the power to increase the exposure of Bologna as a host start town. The Bologna course will live on long beyond the start on Saturday 11th May and allow many more people around the world to experience a small part of this historic city.

In addition to the course launch, Zwift and the Giro d’Italia will be hosting a special exhibition event on Thursday 9th May from race village in Bologna. Four of the competing Professional Continental Teams, Nippo Fantini, Bardiani, Androni Giocattoli Israel Cycling Academy, will take to the Zwift Bologna Course in two separate races. Former Giro d’Italia Winner, Ivan Basso will make a brief return to the race on the Zwift course to test his legs. Zwifters will then be able to see how they compare to the times set by these professionals when the course launches on Saturday 11th May.